The Lane Construction Corporation and its parent company and joint-venture partner Webuild Group have signed a final agreement worth $16 billion with Texas Central that marks the latest milestone ahead of the start of construction of a high-speed railway between Dallas and Houston.

THE PROJECT: THE MOST SUCCESSFUL RAILWAY NETWORKS IN THE WORLD

A high-speed train line – the first in the United States – to link two major cities, Houston and Dallas, in less than 90 minutes, reworking Texan mobility in a sustainable perspective.
Texas High Speed Rail will guarantee fast, safe and low environmental impact travel for 13 million people who today move between the two cities by car – the preferred means of transport by Americans for traveling through the Texan state – or by air.

Just like Madrid-Barcelona, Tokyo-Osaka or Paris-Lyon, the two cities Dallas and Houston are at the right distance to guarantee reduced travel times compared to car travel and at extremely competitive prices compared to air travel.

The railway, which will be 380 kilometres long, will transform mobility between two U.S. cities with strong population growth. The high-speed train will link Dallas and Houston in 90 minutes with a train every 30 minutes at peak times. There will be one stop in the Brazos Valley, where Texas A&M University is located. It is expected to be 90 minutes faster than car travel and one hour faster than air travel considering boarding times.

Dallas and Houston are respectively the fourth and fifth largest economies in the U.S, after New York, Los Angeles, and Chicago. The two metropolitan areas are amongst those with the highest population growth.

According to the US Census Bureau the Dallas/Fort Worth Metroplex registered one of the highest rates of population growth in the U.S. – 1 million from 2010 to 2018.

It is estimated that 6 million passengers in 2029 and 13 million in 2050 will use the high-speed train between Dallas and Houston. 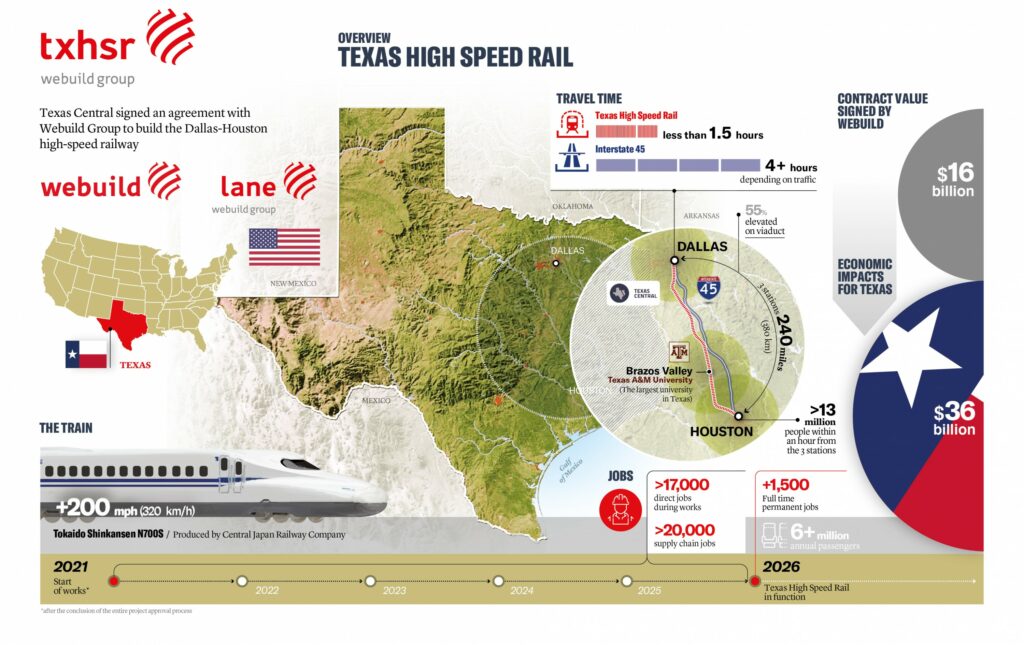 From an environmental point of view, the Dallas- Houston train is expected to reduce CO2 emissions by approximately 700,000 metric tons annually and will eliminate the presence of 14,630 vehicles per day on I-45 between Houston and Dallas. The train is six times more efficient in terms of energy than the car, the preferred means of transportation in Texas. It will also emit 1/12th of the CO2 of a Boeing 777-200.

From an economical point of view the high-speed train will be entirely financed by private investors and will have enormous benefits for the region: 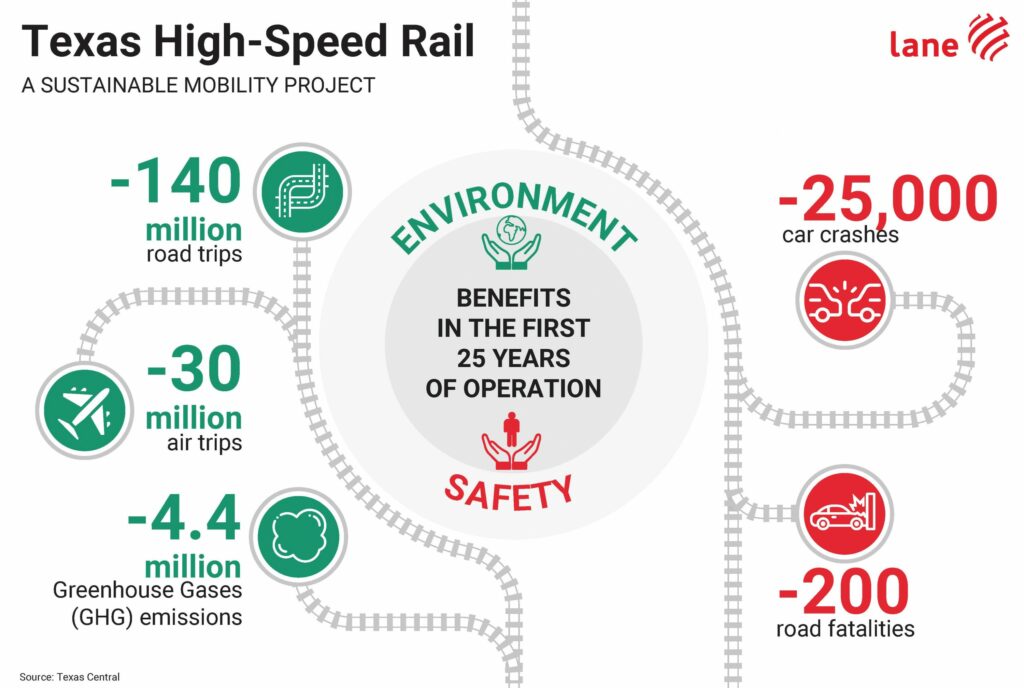 Over 13 million Texan residents live less than an hour away from the three bullet train stations. As many as 16 million trips are made each year between North Texas and the Houston area. These trips are expected to grow at a rate of 1.5% per year, almost doubling the national average.

90% of travelers currently travel by car, the rest by plane. According to the most complete and recent study, 72% of travelers said that if the high-speed train were an option, they would already “certainly” or “probably” use it today.

The new railway line will therefore have a great impact in terms of decongesting Interstate 45, one of the busiest arteries in the US, which – with the train operating – will have about 14,630 less vehicles per day traveling along it.

Currently, to cover the distance between Houston and Dallas, considering the traffic jams, it often takes over four hours: a time that, according to the Texas Department of Transportation, is destined to expand, exceeding six hours, by 2040. This is a huge problem also from an environmental point of view due to the ever-increasing CO2 emissions.

THE JAPANESE FORMULA TO TRAVEL FAST IN THE SAFEST WAY POSSIBLE

The Texas train will be based on Central Japan Railway’s Tokaido Shinkansen train system, the world’s safest mass transportation system.

Japan’s Shinkansen first came into service on the Tokaido Shinkansen line between Tokyo and Osaka in 1964. Its 55 years of service have been a veritable triumph for the country in light of the benefits it has brought, especially in terms of safety. Its track record is enviable: zero accidents on land, on board or along the rail line. The average rate of punctuality: one-minute annual delay.

The high-speed train transports 420,000 passengers a day along the Tokyo-Osaka line, the busiest in the world. Japan’s network of high-speed rail service covers about a dozen lines. The original N700 model with 16 carriages has been revised for the United States in the form of the new N700-S with eight carriages and an operating speed of up to 320 kilometers per hour.

The Lane Construction Corporation is one of America’s leading construction companies, specializing in large, complex civil infrastructure. For 130 years, it has contributed to the development of the country’s transportation systems including the Interstate Highway and a vast network of roads, bridges, airports, metros and railways.  Lane specializes in mobility, tunneling, and water resources to address sustainable development and climate change adaptation challenges.

The Group has a long experience in rail infrastructure, especially in complex systems for high-speed and high-capacity trains. It has a track record of 13,637 kilometres of rail and metro lines (since 1960).

The Group’s expertise includes the metro networks in cities such as New York, San Francisco, Paris, Copenhagen, Milan, Rome, Lima, Riyadh and Doha. It is also involved in the construction of iconic projects in other sectors of the infrastructure industry, such as the Rogun dam in Tajikistan, which will be the highest in the world; the Snowy 2.0 hydroelectric project in Australia; the Northeast Boundary Tunnel in Washington, D.C.; and the Al Bayt stadium for the 2022 World Cup in Qatar.